Whose youth matters when children are sexually assaulted?

(banner image from Times Up)

This week has been shit for a lot of us. Watching Dr. Christine Blasey Ford come forward as a survivor of sexual assault  (ugh, do I have to say “allegedly”? Fine. Allegedly.) at the hands of Supreme Court nominee Brett Kavanaugh, has been triggering, to say the least. I am immensely grateful to her for speaking her truth despite knowing she was going to be treated horrifically.

This week served as the most unnecessary reminder for all of us about how survivors are treated in our culture. I have learned from watching the Republicans that even if they were to accept Dr. Blasey Ford’s truth, that truth doesn’t matter,  because Kavanaugh was a teenager and it was such a long time ago. Like we get it, you don’t give a shit about survivors. WE KNEW THAT THANK YOU FOR REMINDING US.

There is so much to be said about what has been so fucked up about watching this all unfold, such as how difficult it is for survivors to be believed, about how this is like rewatching the trauma of Anita Hill’s treatment all over again, about how much so much of this country does not care about women, and so much more. All of that matters a great deal. But I want to specifically talk about what it is like, as a childhood sexual trauma survivor, to watch people dismiss a perpetrator because he was young and it was “a long time ago”.

“He was just a teenager”

Ah yes, Brett Kavanaugh was a teenager, and boys will be boys. I was thinking of hyperlinking to examples of this line of thinking and how it has benefited young white men who sexaully assault people, but the list became too long so I decided it unnecessary.

I’ve heard many say that if Brett Kavanaugh did sexually assault Dr. Blasey Ford that it is no longer relevant since he was just a teenager back then and shouldn’t be held accountable for decisions he made in his youth. 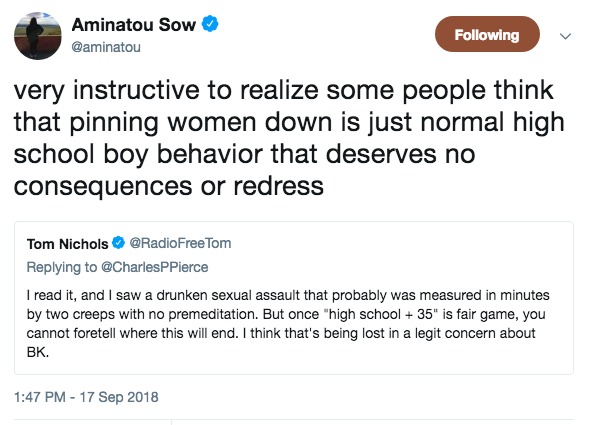 But we were kids too.

While someone like Brett Kavanaugh got to continue his life beyond his “youthful indiscretion” to be a DC Circuit judge, we are left with scars that do not heal.

Youth only seems to be a part of the conversation in reference to the perpetrator as an excuse for his behavior. We keep hearing about how Brett Kavanaugh was 17, over and again. But Dr. Blasey Ford was 15-year-old child. And we were children.  Ah yes, boys are rough and crass and “grow out of it”. They get to grow out of it, but we do not. Our trauma stays with us, changes the course of our lives in perpetuity. Our perpetrators are just “being kids”, but we do not get to be kids. They took that from us.

My friend Tara, who is a survivor and a brilliant attorney, puts it this way:

All I can think every time I see the news is that somewhere in this country there is a 15-year-old girl who was assaulted at a party last weekend. But why should she tell anyone about it? If she will be attacked, interrogated, judged on every level for being just a child. So she won’t.

And while we are on the subject of youth, let us listen to the many people who have pointed out that for white men, committing crimes in one’s youth is something that is forgivable, and perhaps even expected. Yet, that same leniency is never afford to children of color. Let us just think about the way Trayvon Martin and Mike Brown were demonized as children as a way to justify their murders.

“It happened a long time ago”

I keep hearing people on the news talk about how if the allegations against Brett Kavangh are true, then they aren’t relevant because it happened such a long time ago. I can’t stop thinking about it, because when you’ve been traumatized there is actually no such thing as, “a long time ago”.

Our trauma walks with us everyday of our lives. And for those of us with PTSD, we are literally time traveling back to the moments of our trauma each time we are triggered. What we’ve endured has neurologically damaged our brains so that we don’t distinguish between the past and present. Our perpetrators literally destroyed our capacity to say that, “it was a long time ago”. They did that to us.

A 15-year-old girl was attacked and has lived with that inside her mind and body for 30 years, while her poor assailant went on to become a powerful judge in the DC Circuit, now being considered for a lifetime SCOTUS appointment.  She has a lifetime appointment of PTSD thanks to him and FUCK everyone who can’t see this.

What a privilege it must be to think of time as an asset. Because, as seen from her therapist’s notes, Dr. Blasey Ford was still dealing the trauma decades after the assault, and it was impacting her marriage. For us, as childhood survivors, time is just a way that people diminish what we’ve gone through, time is a burdensome expectation from others that we should be “better” or “cured” or “over it”.

I don’t want to explain to you why Dr. Blasey Ford matters, and why it’s important the way everyone is treating her, and why we have to stop Brett Kavanaugh. I think you know. I just want to say being a survivor is hard, and having to explain why your girlhood mattered, why your humanity and safety mattered, is hard. Watching others dismiss your trauma by weaponizing youth and time, two things that you yourself were not allowed to have, hurts.

I want to end with the following words from Tara:

This is our culture of shaming survivors into silence, of giving assailants the benefit of the doubt and second and third chances. Ford is all of us. And we deserve better.

This time sucks. It’s triggering as well. Take care of you and I promise I’m taking care of me too. I got your back, as always.