On hopefulness and hurt
Close

This story references the many triggering perpetrators we've been reading about in headlines.
Alisa Zipursky
Pop culture

It was only four weeks ago when I wrote about “Me Too” and why I don’t feel optimistic in this moment. Four weeks can change a lot: cucumbers can become pickles, the cost of an unpaid parking ticket doubles, another uterine lining sheds. And, for me, four weeks can move me from a place of pessimism, hurt and exhaustion, to a place of hopefulness, hurt and exhaustion. I can’t identify the exact moment, but I have, over the past weeks, found a hope living inside and around me about this time of public reckoning around sexual harassment and assault. 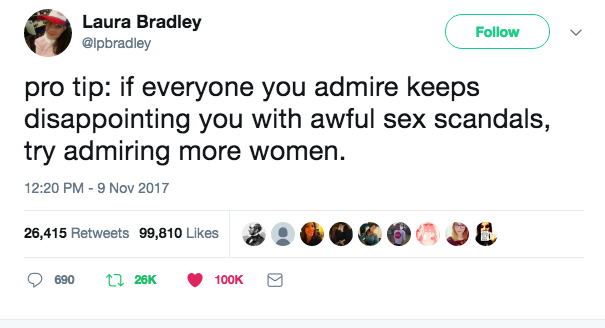 I stand by what I expressed a month ago: I remain frustrated that people are shocked by the pervasiveness of sexual misconduct because survivors have been out here saying this shit for ages. And I remain worried that many conversations about this moment center around women being obligated to speak up, and the burden on survivors to risk re-traumatization in order to cure our societal ill. 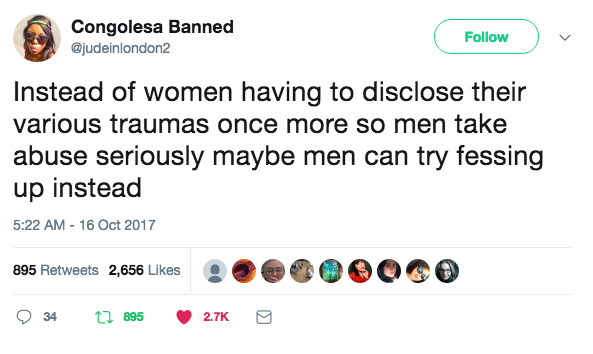 BUT! But it does feel different for me now. I feared that the public conversation would move onto the next issue or scandal without creating any lasting change to the power structures that silence survivors. But here we are, still going strong, still talking, thinking, and writing and perpetrators are actually being held accountable! Some perpetrators are losing face, their public standing, and jobs.

Feeling relief when another perpetrator is made public

Each time we hear about allegations about another powerful man I feel a sense of relief. We know sexual harassment and assault is rampant, and I find myself saying, “KEEP IT COMING. WHO’S NEXT?” 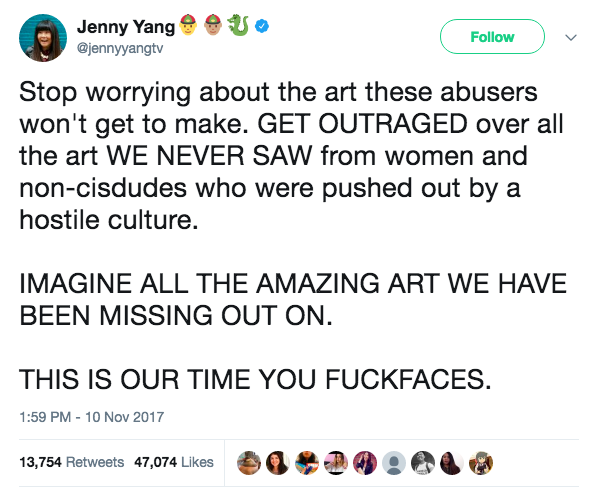 I feel an urgency to have as many perpetrators be made public as quickly as possible that stems from a fear that we, as a society, are going to redirect our attention to another issue, and this window won’t be open indefinitely. But even that feeling is starting to dissipate, as I try to give myself permission to hope that it isn’t a window that closes, but rather, maybe a wall we are demolishing never to be built again. 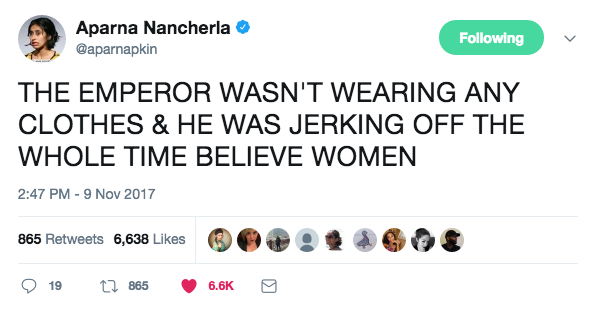 I felt particularly relieved when the Louis CK allegations were made public, because there had been rumors about him for years, and it was a known secret among women in comedy that he was a total creep. I felt such relief that he could no longer defame his accusers or make such boldly unapologetic moves as making a move called I love you, Daddy.

Survivors are speaking up. We’ve always been. What’s different now is that some people in power are listening and believing us (...somewhat more). And that, in turn, makes it a little safer for us to speak up. It is only we listen to survivors, when we believe survivors, when we acknowledge that their pain matters, that we can begin to ask the questions about what justice looks like and how we move forward.

What I’m reminding myself and the survivors in my life at this time:

1. Survivors have been speaking up for a long time.

Even though many survivors’ voices are new to us (which is amazing and should definitely be celebrated and supported), survivors have been speaking up since the dawn of time.  I want to take this moment to acknowledge and express gratitude to the people who came before me that risked their jobs, their families and their lives to speak truth to power about sexual violence. (In particular, I’ve been thinking a lot lately about Anita Hill and all she has given to this movement). This moment can exist because of you.

2. This time is triggering as hell.

So many of us are experiencing retraumatization every day, and thanks to PTSD, feel the same, and at times worse, than our initial traumas felt. We can turn off our news notifications and avoid social media, but whether it’s a conversation we overhear on the bus, or a post we are tagged in, at this time, our triggers are unavoidable. It doesn’t mean we aren’t hopeful about the changes happening in our society, or that we don’t support others for speaking out. This is just how trauma works in our minds and bodies, and it means that we have to care for ourselves and our mental health. 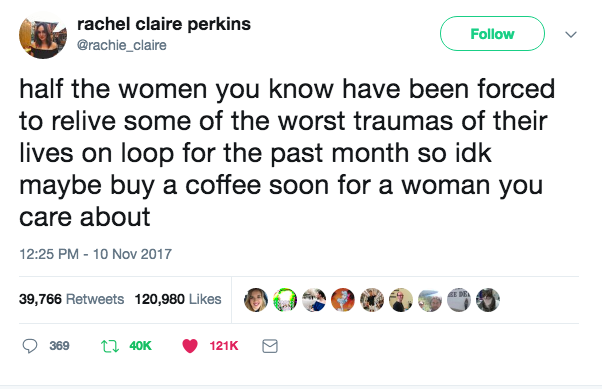 3. We must always ask, “Whose voices are we not hearing right now?”

With this swell of survivors’ voices finally be heard, we must also ask whose voices are we hearing right now? Many of the voices we are hearing are of well-off cis straight white women (Hi, me, right here) It is us who are most likely to be believed, to have access to legal services, to be able to take on the financial risks of coming forward.  it is our stories the media is most likely to cover.

“And there are still huge swaths of women--the poor, the queer, the undocumented-- who can’t count on the security that feminism has conferred on it’s wealthier, whiter adherents, or trust that their victimization would even become news.”  -Jia Tolentino. the New Yorker

As we move forward, we need to dismantle the oppression that keeps survivors’ silent, including transphobia, racism and classism; we cannot have justice until all of us have liberation.

4. Fuck Roy Moore and anyone who supports him.

That’s all I have to say about that.

I see you. I believe you. Your pain is real. Your pain matters. I have your back, just as I know you have mine. None of us has to struggle alone.