'Me Too' and why I don’t feel optimistic

It's okay if you're feeling exhausted and angry right now
Close

In the past two weeks, our social media feeds have been filled with messages of survivors speaking out, saying “me too”, sharing with the world they, like so many women near Harvey Weinstein, have experienced sexual harassment and assault. We’ve seen countless headlines of celebrities coming forward to share their experiences, to express their disbelief, and to describe this moment as “watershed”.

I’m here to tell you that it is okay to not feel optimistic in this moment. It’s okay, if while being heartened to see women share their stories, it all feels shitty and overwhelming. It’s okay to feel exhausted and deeply frustrated. I am with you.

This article isn’t to explain or recap this cultural moment in time, there is a lot of fantastic writing out there that’s done that. I write this to make sense of the way I’m feeling, with the understanding that if I can express how it feels, there’s a strong chance that there are others out there who are feeling the same too. In this post, I quote Aminatou Sow and Ann Friedman of the Call Your Girlfriend Podcast and I highly recommend this week's episode. "Tip of the Creep Iceberg".

The myth of the courageous, outspoken survivor

I want to be as clear as possible, I support any and every single person who speaks publicly about the assault and abuse they’ve endured. Always.

But there is this particular way we idealize or lift up the idea of the courageous outspoken survivor who publicly comes forward. And I feel reluctant even writing this because it’s complicated; I’d rather survivors get called ‘courageous’ than sluts or a liars, which is often what we get called when we speak out.

But when we talk about the courageous survivor who speaks out, we often make the harmful implication that those of us who don’t speak out lack courage. And the honest truth is that to endure sexual violence and continue to exist in the world each day requires infinite courage. Survivors have a million reasons why they may not speak publicly about what they’ve endured, and each and every one of those reasons must be respected just as much as we respect those that speak publicly.

"It's really terrible advice to give survivors to say share your story a lot all the time, because, trust me, it will not feel good...We don't live in a world where we make it easy for people to disclose." - Aminatou Sow, Call Your Girlfriend Podcast, Oct. 20, 2017

Secondly, I’ve heard and read so many people who say that survivors speaking out is the key to making this a watershed moment, that if more survivors feel like they can speak up then we can change the toxic masculinity in our society. But I have to call, in the harshest terms, bullshit on this. It’s not our responsibility as survivors to fix this problem. It’s not our responsibility to re-traumatize ourselves by telling our stories over and over again in hopes that someone will believe us and justice will be served.

As a public survivor, it feels nearly impossible right now to even try communicate what barriers we face in speaking out. In addition to retraumatization and the enormous mental health tolls, we have institutions actively working to silence us, whether it’s media outlets telling us we don’t have enough proof of our trauma to satisfy the company’s fear of lawsuits (a very real challenge I’m actively dealing with), or, for those of who become public, like my badass and extraordinary friend Calla Hales, we endure shit like this, this and this. I cannot overstate how silencing, harmful and crippling these barriers are, and I’m a wealthy, cis, straight white lady, an identity with the fewest barriers to speaking out.

It isn’t survivors speaking out that’s going to stop sexual harassment and violence. Men, take care of your own, and get it the fuck together. Stop putting this on us.

Ultimately, people speaking out and telling their stories is without a doubt a net positive for society. But the price of doing this is high and the way we frame the conversation is harmful to both survivors and, also, to ending sexual violence.

The maddening "shocked and surprised" men

As an outspoken survivor, there’s pretty much nothing more maddening than reading and hearing men’s reactions as shocked and disgusted by Harvey Weinstein and the personal accounts of those sharing their “Me too” statements. If you are shocked, then what have you been doing this whole time?

And I get that many people’s reaction is to welcome these men into the waters we’ve all been swimming in (better late than never) with the very logical understanding that without them we cannot actually move forward. All true.

But I’m still going to be furious because...are you goddamn kidding me? Women have been speaking out since...I DON’T KNOW, FOREVER, and you’re just now listening?

There is, for me, only one question that my brain goes to every time I hear a man was shocked and appalled, and it is the following: What about you makes the women around you feel like they cannot trust you? Reflect upon that, please, and then maybe we can start moving forward. 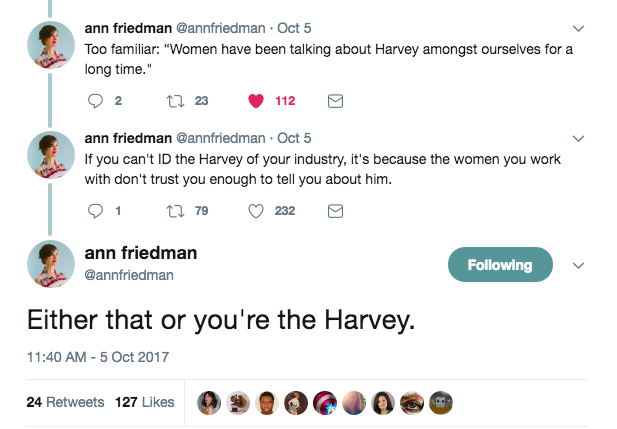 And to all those men: Do you still sing the words to R. Kelly “Ignition”, watch Woody Allen films, or dance to Chris Brown?

I fucking thought so.

*It’s no coincidence that Ronan Farrow, son of Woody Allen, was the journalist who did the major reporting on the rape allegations against Harvey Weinstein.

To my fellow survivors:

Are you are struggling right now? Me too. I am here, I am beside you, I am with you.

You are under no pressure to speak out about your trauma; I trust you, and I know you know what is best for you.

It’s okay for us in this moment to feel ambivalent at best, pessimistic at worst. I believe that we can feel this because we acutely understand what we are up against.

All we have to do is wake up in the morning and remember a man that bragged about sexually assaulting women is President of the United States to feel how insurmountable this fight can seem.

This may be my first story where I sound angry. It is because I am angry.  And while I remain committed to this fight, I am angry that I cannot feel hopeful in this moment.

Now is the time for us to give ourselves the space and time we need to nourish ourselves and fill ourselves back up so that we can keep going, because there are days when to just keep going takes all the courage in the world.